No shocker: Denver’s increasingly expensive, and middle class and working class people are finding it hard to stay in town. But city officials say they might have a partial fix — if they can get the community on board.

Last week, Community Planning and Development and the Department of Housing Stability released a draft policy of their plan, called the Expanding Housing Affordability project, to make developers build more affordable and mixed-income housing in every neighborhood and to raise money for affordable housing construction — part of what policymakers are describing as equitable development.

The public has until the year’s end to offer comments on the Expanding Housing Affordability project. If all goes well for the city planners, the project will be finalized by spring 2022 and rolled out in the following years.

Developers and people looking to build a life or stay in Denver have plenty at stake as they decide how to weigh in on the project.

Denver’s becoming too expensive to preserve its working and middle class — and risks losing its economic and cultural diversity.

There’s a lack of affordable housing and rentals available for middle-class and low-income people. Apartment vacancies are few, driving rent high. With a median house price of $575,000, according to the latest report from the Denver Metro Association of Realtors, buying a home is competitive — and too pricey for many to imagine.

Three of the industries projected to boom over the next two decades — health care, social assistance and educational services — pay workers 50 to 20 percent below the area median income, according to the city’s proposal. Restaurant and retail workers, first responders and educators are all hit hard. Salary and wages have not increased along with the cost of living, and the workers needed for these industries won’t have a place to stay, along with many old-timers who have not seen their paychecks go up but are watching their rent and property taxes skyrocket.

In short: Many people can’t make it in Denver and many who haven’t left yet will be forced to move if they want to keep a roof over their heads and their budgets balanced.

What the planners are saying is that these trying times for working and middle-class people are not an inevitability; they are a matter of policy — and that policy can be changed. 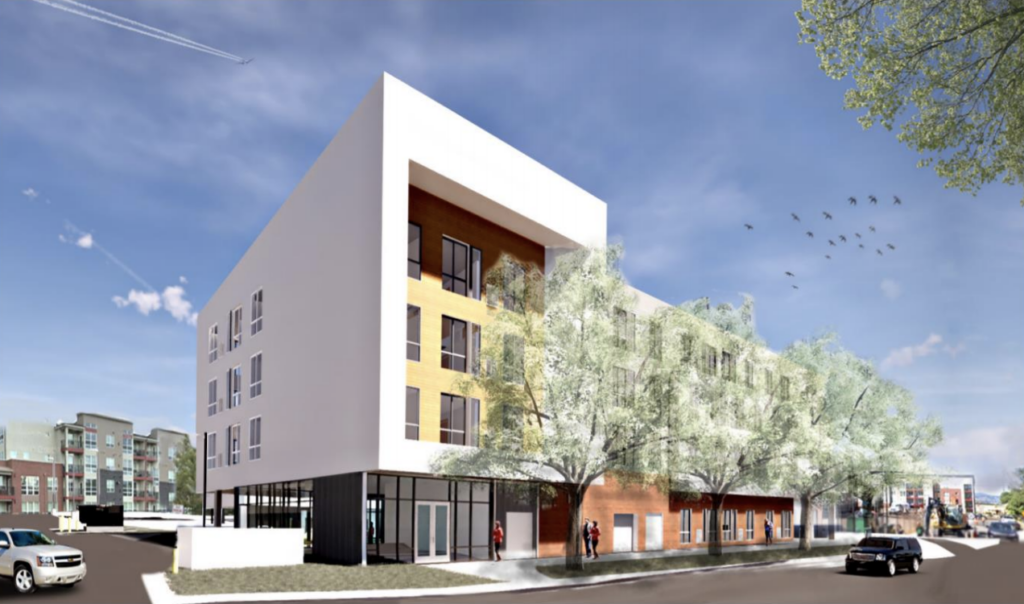 What is “affordable housing” anyhow?

“Affordable housing” can be a confusing term. It does not mean free housing for the poorest of the poor, those sleeping on the streets or even working minimum wage jobs and living in crowded homes while spending most of their earnings on rent.

Housing affordability is measured like this: People should be paying no more than 30 percent of their annual income on housing expenses; if they’re paying more than 30 percent they are “cost burdened” and their home is considered unaffordable for them. That scales up and down, no matter a person’s income.

Affordable housing describes places people can pay to live without falling into a financial hole. This kind of housing used to be abundant in Denver for the working and middle classes without city intervention. No longer. From 2010 to today, Denver has 28,000 fewer homes to rent for people making up to 60 percent of the area median income, according to the proposal.

The city’s focusing its new affordable housing program on the working and middle classes — people making between 51 and 80 percent of the area median income, hoping to spend public money on housing for people making under 50 percent.

“As a result of these growth patterns, the city has become slightly less racially and ethnically diverse, much more highly educated, higher income, and older,” the proposal states.

Despite the pandemic, housing prices have continued to remain high, and though the market has been cooling off some, it’s still competitive, says Nobu Hata, the CEO of the Denver Metro Association of Realtors. His organization’s confident this is no bubble market. Prices will either continue to rise or plateau.

With a worker shortage and a need to attract more people to fill jobs, the ramifications of an unaffordable market are expansive — not just for individuals and families but for the economy as a whole. 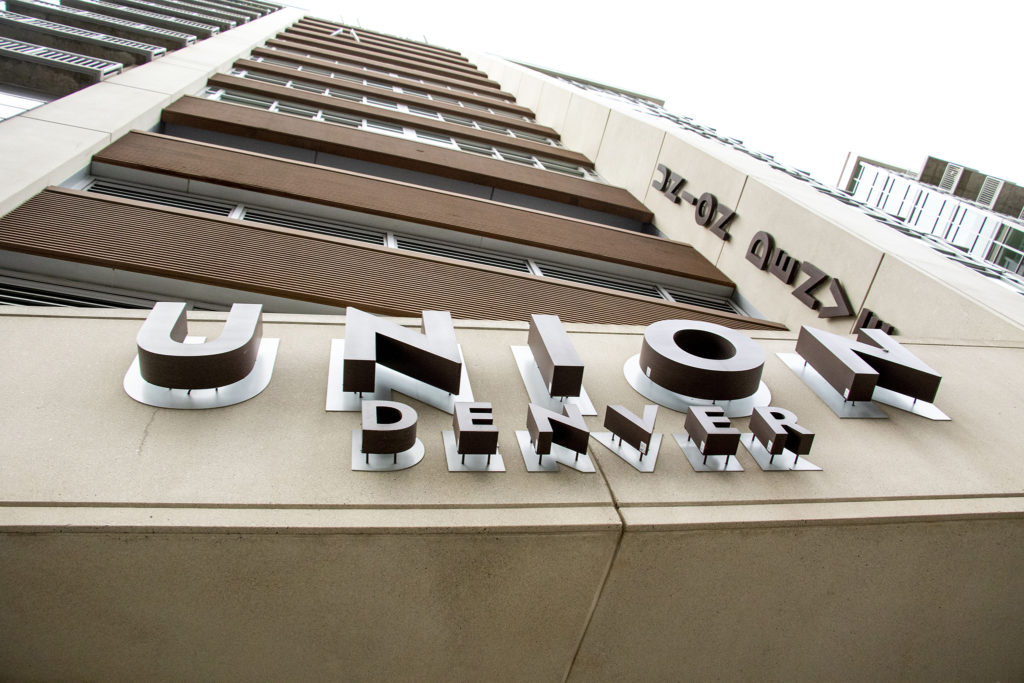 The city has tried to find solutions before.

Denver used to have a requirement that developers building projects for thirty owners or more would have an affordable-housing requirement. But most new projects weren’t that big, so the program did little to meet the rising needs, and the policy did not apply to any buildings to be rented.

In 2016, Denver launched a linkage fee program that forced developers to pay into an affordable housing fund when they built new commercial properties. The city also started dedicating some property tax revenue to affordable housing, and since 2018, the money has helped build 3,000 affordable homes, according to the proposal. Those are projects like Central Park’s Northeast Denver Housing Center and the Sheridan Station Apartments.

The city acknowledges even that’s far from enough. 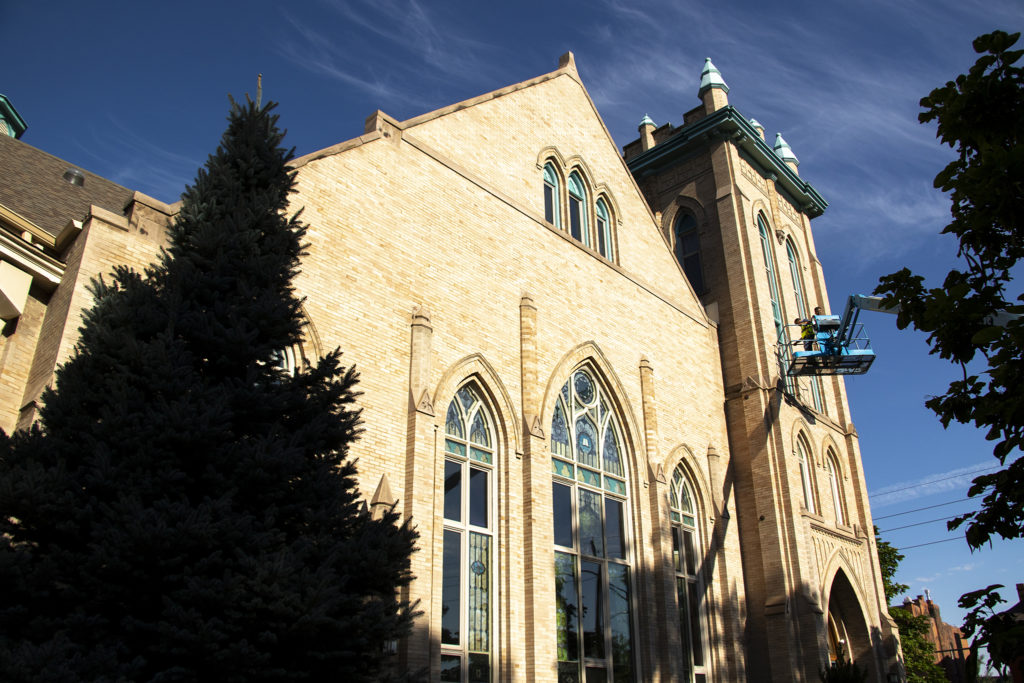 So why didn’t Denver politicians aggressively address the rising crisis until now?

Because of Colorado law, there wasn’t much local policymakers could do to stabilize rent or mandate affordable housing builds. That’s because the state has a law that bars cities from enacting rent control and has long prevented them from mandating developers to include affordable housing in new developments. The argument, from state lawmakers who have kept the statute intact, is that how municipalities handle these issues would have statewide consequences.

But last May, state lawmakers passed a bill that relaxed the rent-control statute, and that now allows cities to require developers to include affordable housing in new developments — both for rent and to own — as long as developers have one or more choices about how to do so.

That’s where the Expanding Housing Affordability proposal comes in. 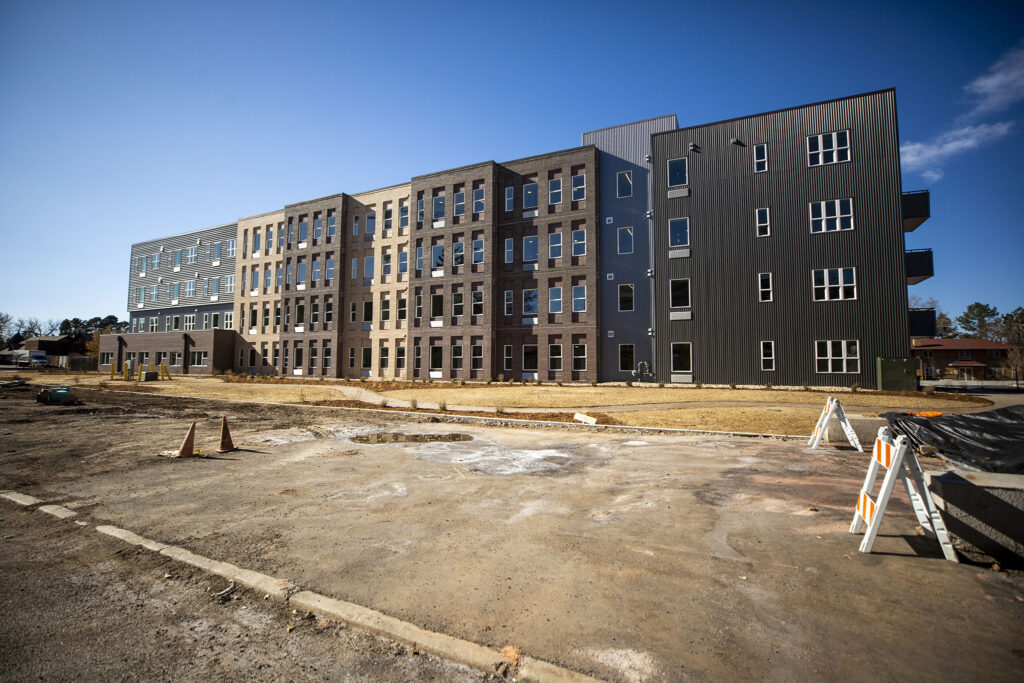 If the developers opted to build, the number of units they would have to create would be based on:

If the developers opted not to build affordable housing, they would be charged a fee. They’d pay between $268,000 to $478,000 per affordable unit they would have been required to build. The final amount would be determined by whether the units would be rented or owned or whether the market area was typical or high.

In the third option, developers could negotiate a better deal that might involve fewer but even more-affordable units, donating land to a new affordable housing development, or other off-site housing projects. This would open up the possibility for public-private partnerships that might do more for affordable housing than the other two options and give developers the flexibility they crave. 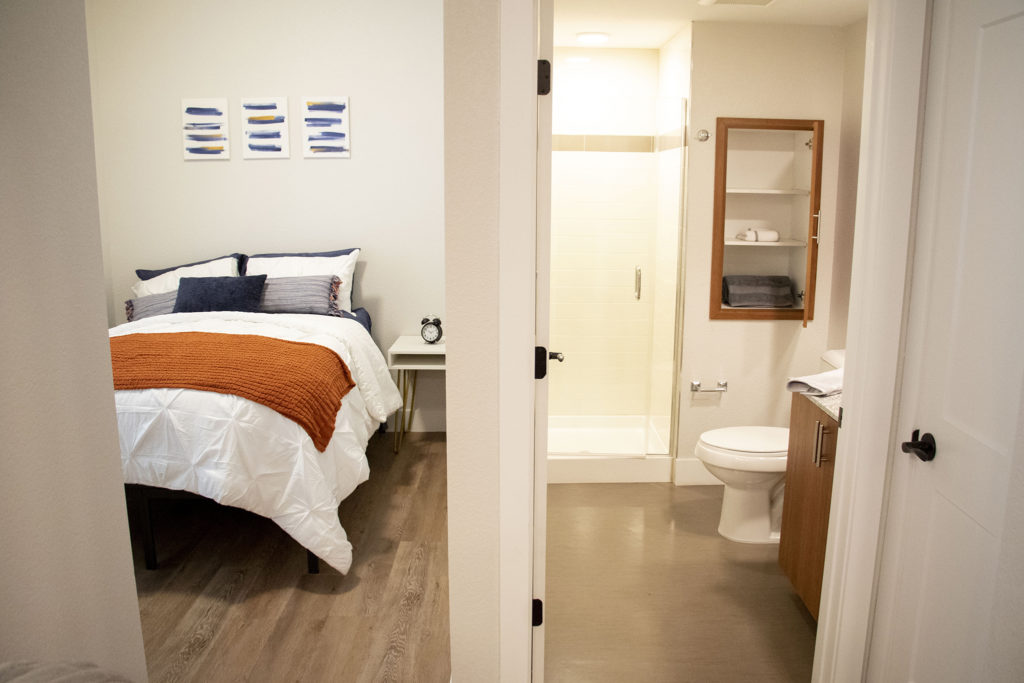 Residents who traditionally oppose density and new mixed-income development in higher-income communities may try to stop the city’s attempt to create housing equity in every neighborhood in town. These arguments are usually based in the theory that neighborhoods should preserve their character — both visually and culturally. In affluent neighborhoods, this typically leads to whiter, wealthier communities.

Some developers — trying to make the most money possible on each project — resist mandatory affordable housing and linkage fee requirements.

Developer Andrew Feinstein argues there are already too many legal hurdles to building in Denver; forcing developers to finance the fix through linkage fees isn’t going to incentivize more building and might actually hamper it.

“If these are too high, the developer, the landlord — they don’t eat these expenses,” says developer Andrew Feinstein. “The tenant does.”

In turn, he argues renters and home buyers will see even higher housing costs and the affordable housing crisis will get worse. Fewer naturally occurring affordable units will be produced.

He and other developers assert that the market will ultimately correct itself with more builds, arguing that the high cost of housing is tied to a lack of supply. Feinstein has championed unlimited development next to transit stops as a better solution.

Yet some affordable housing proponents argue the city’s proposal doesn’t go far enough, arguing that there should be a moratorium on building more market-rate housing until there are enough affordable units that would preserve the working and middle class and ensure the economic and racial diversity of the city. They will likely also continue to fight for an end to the statewide rent-control prohibition, which the City still has no power over. 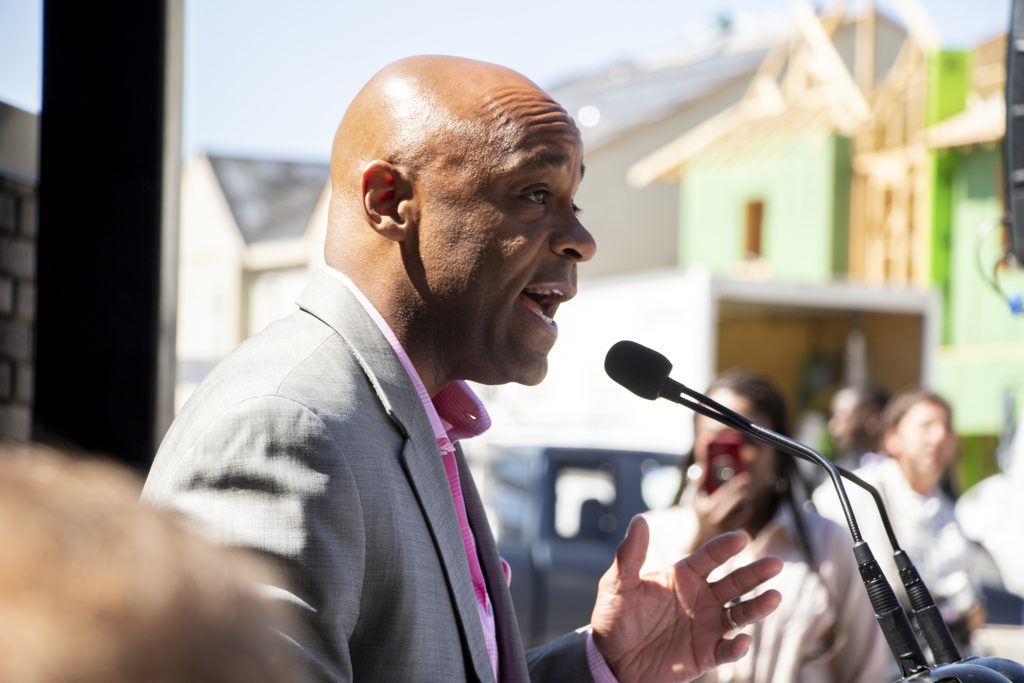 Who will support the proposal?

For one, Mayor Michael Hancock, who has often been described as a developer-friendly politician, is a vocal champion of the proposal.

His three terms in office have been defined by a booming economy benefiting the wealthiest in the city, complaints that longtime Denverites can no longer afford to live in their hometown, and a rise in homeless encampments. For him, this is a swing at housing crisis mitigation.

“This issue affects everyone who lives in Denver. Greater affordability for the people who make up our great city – our teachers, firefighters, restaurant workers, and many others – and putting it within their reach will benefit our city for years to come,” the mayor said in a statement. “We all benefit economically and socially when there is more affordable housing and more mixed-income communities in Denver. This policy proposal improves our ability to make that a reality for Denver residents here today and for residents in the future.”

Champions of neighborhood equity, diversity and inclusion also support the proposal’s citywide approach, arguing the community, culture and economy will be stronger when more people from various communities, races and classes live side-by-side. Combatting longstanding zoning policies that have effectively kept the city segregated by class and race, in the name of preservation, is a priority. If the city wants to be more than just a home of higher income transplants and locals who bought when housing prices were cheap, finding ways to create affordable places to live citywide is an urgent matter.

Those who support density and building up rather than out for environmental and cultural reasons also champion much of the plan, arguing the proposal would give developers more room to build and incentives that make doing so easier.

How can you weigh in on the proposal?

Before commenting, read a two-page summary of the proposal and the full draft policy.

The city will host an online Expanding Housing Affordability project open house from 5:30 to 7:30 p.m. on Thursday, Nov. 4, where officials will explain the policy and take questions and comments.

Through October and November, city planners will be hosting open office hours to discuss the policy with the public. Schedule a time here.

Finally, the city is taking comments and questions on the proposal here.

Guess Who’s Coming to Denver? Expats from San Francisco and New York, for…