There’s another food trend that’s making its way from Denver to the most unlikely rural and mountainous parts of Colorado: food halls. The trendy, cafeteria-style centers for small restaurants, bars, and retail stores have made a name for themselves in Denver. The city’s first food hall, The Source, opened eight years ago in RiNo, and since then food halls have been popping up everywhere, from the Denver Central Market on Larimer Street and the newly opened Grange Hall in Greenwood Village to the Tributary Food Hall in Golden .

It may seem strange to open a food hall in a remote mountain town – usually associated with young professionals enjoying happy hour. And yet that is exactly what two different food halls do. The first to grand opening after several soft openings on September 11th is The Warehouse in Craig of Steamboat Springs-based investment firm Four Points Funding, which focuses on “opportunity zones” in Colorado for the benefit of the community. The other, which opens in late October, is the Bluebird Market in Silverthorne as part of a larger vision for the city called Fourth Street Crossing by real estate developer Milender White.

The warehouse currently has a burger shop, café, bar and deli, as well as a marketplace that sells meat and local products.

Bluebird Market offers a variety of places to eat, drink, and shop. Three are new to the market concepts that include a coffee shop and ice cream parlor; two are local vendors (Baja Chimayo and Crepes a la Cart); and a few others are Denver-based restaurants, including Arvada’s The Mighty Burger and Tilford’s Wood-Fired Pizza from the Edgewater Public Market. One of the most interesting eccentricities of the Bluebird Market is the fact that the building embodies the Old Dillon Inn, a historic bar from the 1890s that briefly served as a post office during Prohibition. The room is complete with bullet holes in the walls and Milender White is looking for a salesman to run it as a whisper bar.

Support the independent voice of Denver and help keep the future of Westword free.

Bluebird Market will also provide a venue for all types of community events. According to S.cott Vollmer, managing director at Milender White, The venue will have live music and hold First Fridays when the weather turns cold, along with everything from yoga classes to farmers markets to movie nights. The warehouse also plans to host community events like the occasional fundraiser and a fall festival.

The key to success for these companies, according to their directors, lies in a number of factors. First, while the food halls are partially tourism-driven, they will primarily cater to the needs of the community in order to thrive.

“We want to preserve the integrity of the community and what they want and need,” said Emma Rush, director of outdoor dining at Four Points Funding and one of the people overseeing the warehouse. “We’re not going to sell like kale and goat cheese and salad bao buns, you know, whatever. We keep it simple. But we want it to be accessible, and we love to be a place where people can have Christmas parties, birthday parties, and weddings and just be the place for anything that goes with Craig. “ 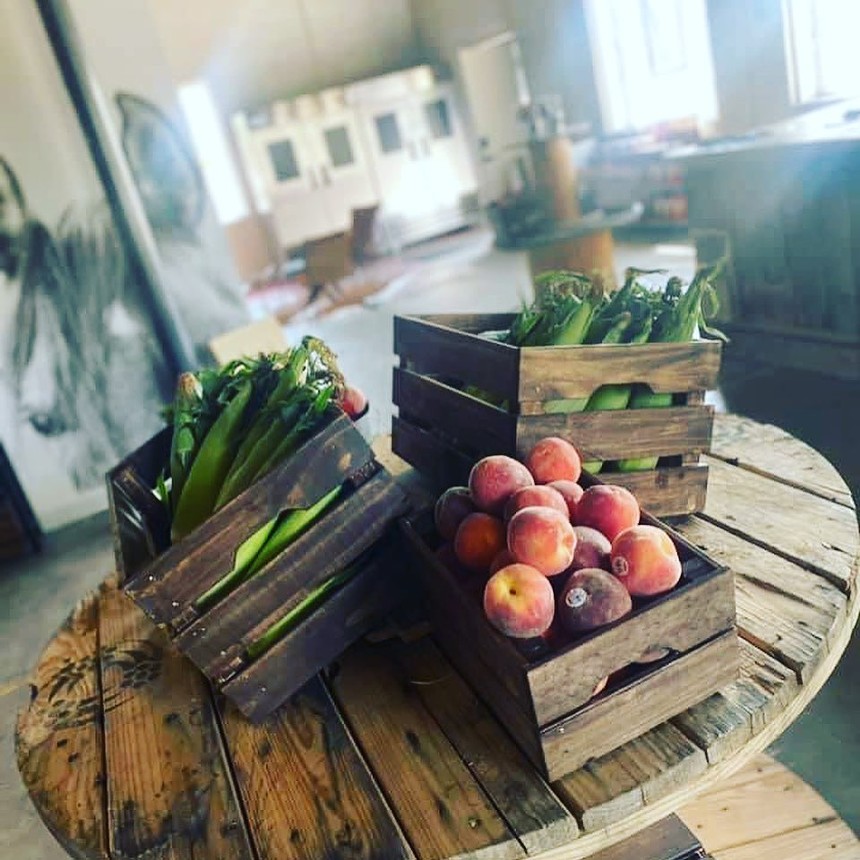 Fresh produce from nearby farms is sold in the warehouse in the market.

When the warehouse opened, Rush said, she saw a multitude of guests arrive: locals grabbing a burger and beer, retirees people-watching, families, and teenagers.

“The coolest part was that actually a group of twenty kids from the local high school came home for dinner. So we set up their own little square facing the market and they wiped the ice away, ”says Rush with a laugh. “You just had a great time. And I think they were really excited to have their homecoming dinner in a new exciting location that is pretty much worth photo ops and just down their alley. But it was definitely a more diverse audience than I’ve seen in any other food hall I’ve been to, and I’ve been to many. ”

Bars like the Source, which is aimed at white-collar workers, have a reputation for offering expensive options (see: modern Israeli restaurant Safta). Vollmer wants to ensure that the Bluebird Market, like the warehouse, is an accessible hub for the locals. “Dillon and Silverthorne have their fair share of dining options, but they’re all just quick-service franchises,” he says. “We want it to be accessible. And that’s why we require grocery vendors to keep entrees under $ 20. We’d like the menus to be $ 10 It’s a place to go out and hang out, but it’s also an affordable evening. There is something for everybody.”

Because of the lower rental and start-up costs, food halls were seen as valuable business opportunities for new restaurants and retail stores. In this sense, they can serve as business incubators.

“Ultimately, my goal and our goal is to see some of these vendors come in, kill them, work their concept, really dial them in, and then move into a bigger room and make room for the next potential restaurateur,” explains Rush. “We want to work with the local community college so that business students can test their concepts. We are working with the local high school that will occupy our cafe.”

The warehouse has six-month leases for its stores that allow new business owners to get their feet wet and try out their concepts without taking a huge leap of faith and risking losing it all. Bluebird Market has slightly longer leases, although in the commercial world they are still relatively short – between two and five years.

Like Rush at the Warehouse, Vollmer sees the Bluebird Market as a new source of opportunity and employment for the city’s local workforce. “Silverthorne is one of the tallest full-time, year-round residences in Summit County,” he explains. “And you have a growing local community that needs to diversify its offerings and revenues without losing its identity.”